Stand up for Labour act of the year 2013

Christian Reilly picks up the trophy 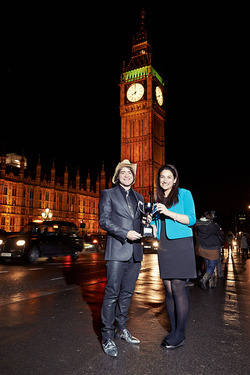 Award presented by our Parliamentary Champion

Stand up for Labour's Act of the Year Christian Reilly picked up his trophy in a ceremony at Portcullis House in Parliament last night.

Runners up Norman Lovett and Paul Ricketts were also presented with trophies by Stand up for Labour's Parliamentary Champion Luciana Berger MP.

Also in attendance on the night were Arnold Brown, Steve Gribbin, Crispin Flintoff and John Moloney.

Christian polled 532 out of over 1,500 votes to secure the prize of Stand up for Labour Act of the Year 2013. He just shaded it from Paul Ricketts, with Norman Lovett and Sir Ian Bowler in third and fourth place. Joe Wells and Dominic Woodward were the other finalists in the vote and all of the acts were well supported.

Stand up for Labour put on over 50 comedy night fundraisers for CLPs last year and is hoping to increase this number in 2014, with events planned all over the UK.

If you are interested in seeing Christian Reilly perform, you can see him in Paddington on Sunday 16 February.