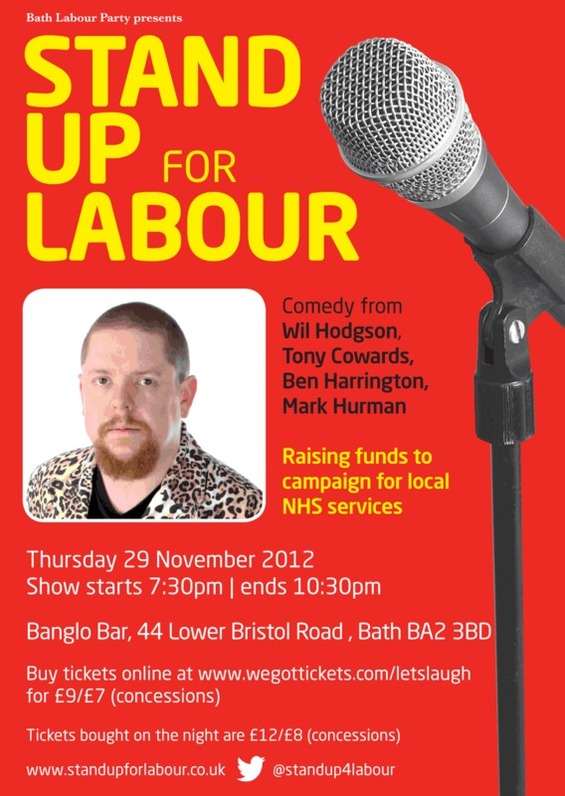 Representatives from Unison, Unite, the GMB and the RCN have all expressed support for Stand up for Labour's event in Bath on 29 November.

The establishment of a pay cartel by 20 NHS trusts in the south west has threatened the working conditions of NHS staff, which is likely to have an adverse effect on patient care. A speaker from Unison shall speak at the event to draw attention to this and ways to campaign against the cartel and anyone interested in signing the petition against the move can do so by going to tinyurl.com/cd5ltna.

At the same time as this issue will have an impact on local NHS services, Bath and North East Somerset Clinical Commissioning Group has decided to close the Riverside walk-in centre to save 0.1% of its healthcare budget. Bath Labour Action Team is calling on the CCG to reverse its decision as this well-used and valuable healthcare centre is vital for vulnerable people, visitors to Bath and those who struggle to pay for transport to the Royal United Hospital. A petition of over 1,000 people has been sent to B&NES Council asking them to refer the decision for a review. A speaker from the Labour Action Team will also speak at the event. If you want to add your name to the petition, go to: http://tinyurl.com/c8zr5v8

Tickets are onsale at www.wegottickets.com/letslaugh and all profits from the night go to the Bath Labour Party, helping its campaign to support local NHS services.