Stand up for Labour could become one of the largest comedy bookers in the country at a time when many comedy clubs are closing (the Manchester Comedy Festival was abandoned this week).

With over 600 constituencies in the country and hundreds of thousands of members of the Labour Party to pull in as an audience, the initiative looks set to provide left-leaning comedians with plenty of paid work.

Crispin Flintoff, a former runner up in the Hackney Empire New Acts competition, set up Stand up for Labour to attract more people into politics and to give comedians an opportunity to use topical, political material. 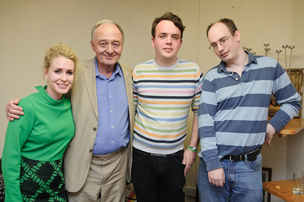 ‘Stand up for Labour is really taking off. In the past week I’ve heard from a dozen constituencies who want to put on an event and I can see that mushrooming. It’s a great way for people to not only laugh at great comedy but also hear serious political speeches from leading politicians and trade unionists.'

Ken Livingstone said: ‘I loved it. It was a great evening and such a fun change from the usual fund raising.'