The great thing about combining a comedian with a politician is that it makes publicity. The local paper, The Hounslow Chronicle, was happy to run a story about Ken Livingstone and Arthur Smith appearing in a local event. 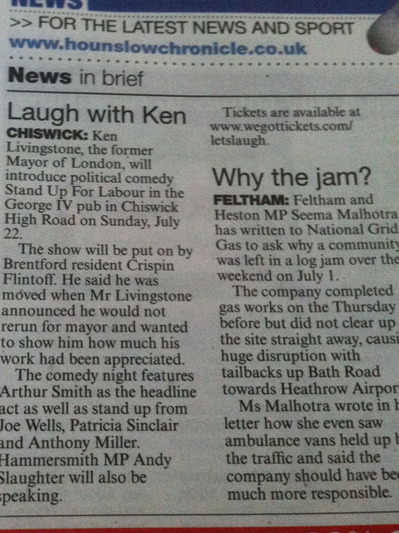 Some pre-show publicity was also found on the local website Chiswick W4.

The Hounslow Chronicle and the Chiswick W4 are the two largest news providers in the branch. But the CLP also put out a newsletter to most people in the constituency (the whole of Brentford and Isleworth) in which this ad appeared: 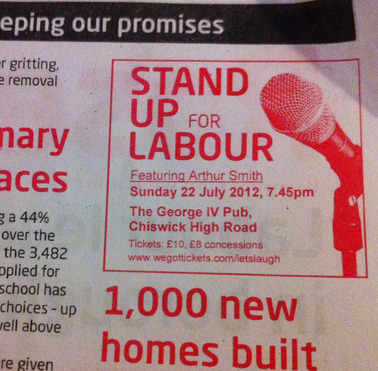 It was not quite as prominent or designed in the ideal way but it was another way of getting the event out to the general public.

And with the posters put up in shop windows and the emails and tweets sent out, I guess it was no surprise when nearly 200 people turned up.

How many fundraisers get publicity both before and after the event?

The Hounslow Chronicle featured this short story in its printed edition: 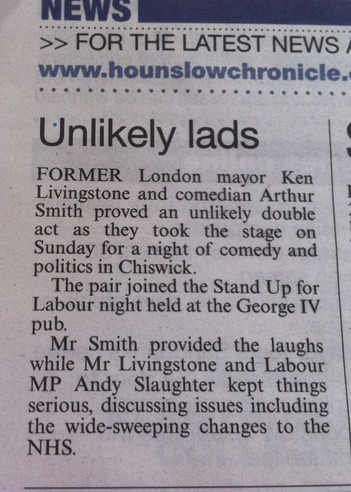 This may sound like a snide headline but the story actually brings up the issues that were discussed, including the campaign to save local hospitals. And the Hounslow Chronicle's web page was even more helpful:

As was the review in Chiswick W4 (written by me!):

Andy Slaughter also had a good review of the night:

I don't think a raffle could achieve anything like the publicity and the money raised is probably higher than most dinners and raffles too.