'I love doing Stand up for Labour gigs - despite road traffic' 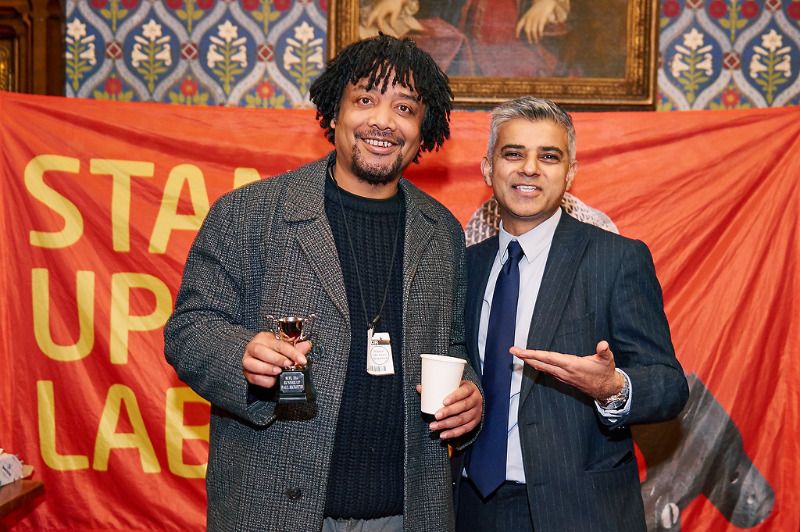 Paul Ricketts has been a stand-up comedian for nearly a decade. In that time his shows have won rave reviews at the Edinburgh Festival and he regularly headlines gigs across the country. In a previous career Paul was also a sound and stage technician, which has been a godsend as many of the venues used by Stand up for Labour do not usually host comedy nights. Many are community centres without stage lights and have antiquated or incomplete PA systems - with microphones that might be good for a children’s karaoke party but aren’t suitable for professional comedians.

Paul’s travelled over 10,000 miles across Great Britain for Stand up for Labour and not surprisingly some of these journeys have been testing. The state of the UK’s road network has led to journeys of over six hours and very late trips home in hazardous conditions such as torrential rain, strong winds and recently ‘thundersnow’. Last November, returning from Ipswich, a puncture and a seized wheel nut led to Paul and three other comedians spending a surprisingly entertaining night at Brentwood Service Station.

From many memorable nights, Paul’s picks the two events at Loughborough in May 2014 and last February.

‘They stick in my mind because of the way the Loughborough audience have warmly received the different sort of comedians who’ve walked on stage. On the two nights they’ve seen and loved comics as diverse as the storytelling Wil Hodgson, the quirky observations of Stephen Carlin and smart punchlines of Juliet Meyers or the audience banter of Patrick Monahan.’

Compared with skinny-jeaned comics who appear on TV panel shows Paul has come relatively late in life into comedy. But since going on stage he became walking proof of the beneficial health effects of regular laughter.

‘I was clinically depressed and in my final NHS session, my therapist suggested trying comedy. So I set up a comedy night in the pub over the road from my therapist's office’

Paul recalls his first gig: ‘In my first proper show I performed two characters. Adolf Heckler, who unfortunately succeeded in trying to teach the audience to heckle, and Buff Wood, a Jamaican carpenter and pine stripper who’s sexually attracted to furniture. I’m sure the audience were more frightened of me than I was of them.'

'I could pick many favourite comics as I love many different styles of comedy and comedians from film, sketch, stand-up, musical comedy, satire, political, surreal, etc. I chose these three comics because firstly they’re British and I’ve either performed with or seen them live. Felix Dexter, who died recently, was one of UK most underappreciated comic talent – the Godfather of Black British comedy. Caroline Aherne is a comedy character genius and a wonderful writer. While Simon Munnery just seems to do it all from character, sketch, stand-up, musical, political, poetry, visual and plain silly but funny.'

A busy couple of months ahead

Twice a runner-up in Stand up for Labour’s Act of the Year, Paul Ricketts is looking forward to a busy few months before the General Election. Paul is especially looking forward to events at the Ministry of Sound (which is in his own constituency) and the historic Stratford East Theatre Royal. But he’s also going to be in Salisbury, Derby, Greenwich, Buxton, Kettering, Chepstow, Smethwick, Rochdale and Sutton.

‘Stand Up For Labour gigs are really enjoyable because I love doing political material and at the same time actually do something to help remove Cameron and his privileged Conservative Party from power’.